Poor Posture Is Affecting Your Yoga

Poor Posture Is Affecting Your Ability To Fully Express Your Yoga.

If you are sitting at a desk right now, how is your posture? Are you snapping yourself upright as you read my words? If you are sitting in an office, how is the posture of your colleagues? You’ve probably heard whisperings of late – maybe even a few shouts – about the hazards of sitting. Not only is “Deskasana” bad for spine health, but other serious health consequences are also coming to light about being chair-bound for extended periods of time including – cancer, heart disease, even premature death.

Today, most people suffer from Deskasana or that all too familiar rounding mainly of the thoracic spine and associated misalignment of the neck. Because even if you work out, your training session only adds up to a few hours a week. And most people spend virtually ALL their other time sitting down…

• Driving (or taking an Uber)? SITTING DOWN.

• Riding a train or plane? SITTING DOWN.

• At the office or in school? SITTING DOWN.

• Watching TV or reading a book? SITTING DOWN.

You get the idea.

SPENDING SO MUCH TIME IN A SEATED POSITION CAUSES A LOT OF PROBLEMS FOR OUR BODY.
The thing is, as humans we’re meant to move. We’re built for it. For instance, we have over 360 joints and about 700 skeletal muscles that allow to us move fluidly, our blood and nerve cells depend on us to move around, and our skin is elastic, stretching and bending with our movement.

When every inch of your body is waiting for you to move, what happens when you don’t?

To Add to That.
Your brain is a supercomputer constantly being bombarded with environmental feedback and raw data. This data can come from emotional and mental stress as well as physical. Your brain decides how to respond and interpret that data, setting parameters for what it deems to be "safe". Over time your body has made adjustments in an attempt to maintain balance, conserve energy, and protect itself from the prospect of harm. From a physical standpoint adaptations to your muscles may not be the most functional, often resulting in a forced shortening of the overstretched weak muscles like the mid/upper back.
Energy use, nutrient flow, and waste removal are reduced in these muscles from prolonged contraction leading to local toxicity, inflammation, and pain.
Besides making your muscles and joints all cranky and stiff other risks of sitting for long periods of time can include contributing to heart disease, diabetes, liver and kidney issues. Studies have shown that sitting for long periods of time, over long periods of time, is linked to 9% of premature deaths worldwide – yikes!

This adapted posture doesn't just go away when you stand up. When you go to do your other non-sitting activities with your misaligned programming, those activities will also be originating from a place of unconscious imbalance, reduced joint mobility, and misleading pain alarms.
This is why you may have not had the success you were hoping to achieve in previous attempts to reduce pain and increase mobility or even saw the opposite.

How poor posture is affecting your ability to fully express your Yoga.

But I thought that's why I was doing yoga?
Has this ever happened to you? 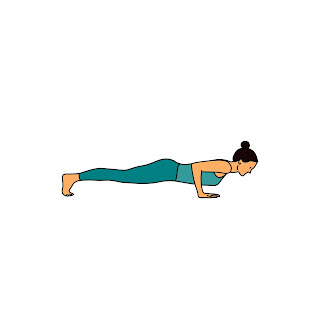 Lowering into chaturanga you feel a twinge a pain between your shoulder blades and freeze. This is probably your mid-back muscles "contracting on the short". In order to lower down smoothly, the muscles that stabilize your shoulder need to work in a dance of controlled contract and controlled release.
So what can we do to fight it? The biggest problem with lengthy sitters seems to be poor posture, so sitting up tall can help a lot (you know, like you do in yoga class but often don’t do anywhere else?). Also, get up! It’s recommended that chronic sitters get up every half hour, or as often as possible for a stretch, a walk, some yoga poses, etc. Sometimes we forget, or we get lazy. That’s why there are all these apps, gadgets, and doodads these days reminding us to get up every so often and maybe even giving us a zap to sit up and stop hunching.

By the way, this does not excuse us from sitting to meditate (sorry!), it just encourages us to work harder to sit WELL when we do sit.
So I just need to sit up straight, stretch my chest, and strengthen my back because it's weak got it.
Yes and no,
That means, to fix the pain and stiffness that come from too much sitting, we need to restore your tissues and joints.
The Chicken and the Egg
It is clear that a balanced approach to treating would be to massage and stretch the pectoralis muscles to loosen them and then strengthen the Protractor musculature with resistance training to increase the strength of its baseline tone. We might call this a yin-and-yang approach, or perhaps the chicken and the egg.
Is upper-crossed syndrome caused by tight protractors, or is it caused by weak retractors? The answer is, of course, both. And if one is present, the other will develop, which will then reinforce the first, and so on, causing a vicious cycle. For true healing, we need to address the chicken and the egg
Manual or Movement Therapy: Which Comes First?
There is not an exact recipe for what is best for every client, but when a client presents with musculoskeletal pathology. I believe manual therapy should generally be done first to remove the painful pathology and restore tissue integrity. This is because all manual and movement therapy by definition places a
stress into the tissues. If tissue does not have proper integrity then it is best to minimize this physical stress force in the initial stages of treatment. Generally, movement therapy-and strength training in particular-tends to place greater stress into the tissues. For this reason, I generally recommend that manual therapy should be done first to lessen pain and restore tissue integrity, then the movement therapy strength training can be commenced for
long-term stability and health.
But you'll get the most long term results from improving your posture in your daily life and including movement breaks.
And I created this Free PDF to help you do exactly that.
Exercise Program For Neck Pain
Join Our Community for Support on Your Journey

Also, check out YouTube for some quick stretching routines:

Popular posts from this blog 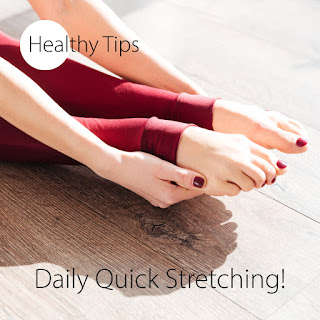 Daily Quick Stretching!  Having a good stretch once or twice a day feels good and can help prevent injuries (flexible muscles can do more), improve your posture (and as a result help with back pain), increase blood and nutrients to your muscles, and help you to feel less stressed.  Here's what I do:  Spinal Stretch – lie on your back, bring your knee to your chest, and then across your body. So your right knee will go over to the left side of your body. Hold this for at least 30 seconds. Then stretch the other side.  Forward bend – Sit with your legs straight out in front of you stretch your arms up to the sky and then bend forward as far as you can.  Spinal Twist- still sitting with your legs in front of you, bend one knee to your chest then twist your body and hug your bent leg.  Other quick stretches (you can do these at your desk)  Clasp your hands behind you and pull back to stretch your chest.  Hold your arm in front of your body and stretch it into your chest  Stretch your n
Read more

The Root of Wellness
MICHIGAN, United States
I specialize in using a whole body approach, identifying and treating the often neglected source alongside the symptom. The most common culprit is a muscular imbalance brought on by an injury, poor posture, or too much time sitting. By working WITH my clients and encouraging them to actively participate in their pain management program, I consistently deliver measurable results in decreased pain and increased range of motion. "All of my massage methods are focused on "deeper" methods and relieving the cause (the root) and not just the symptom, physically and emotionally. I am not a "session" therapist. Most of my clients are on the mat for two hours as they like to get to the deeper levels, ridding them of the everyday pain and discomfort they are experiencing for lasting results. From sports injuries and rehab to active stretching, I help relax tired, over-stressed muscles that are pulling bones out of alignment and bring them back to a more natural, healthy and flexible state. You'll be surprised how quickly we can work together to make measurable improvements and get you feeling better.